When the New Zealand Expeditionary Force departed from New Zealand, it was meant to head to England for training before going to the Western Front. However, when the soldiers arrived in Egypt in December 1914, along with the Australian soldiers, with whom they were travelling in a single convoy, they were informed they would be training there. This was because there were concerns about the training facilities available in the United Kingdom but also because the Ottoman Empire had entered the war.

While the New Zealanders and Australians trained in Egypt, turning from ‘citizens in arms’ to soldiers, the relationship between the men of the two nations was not always cordial. This was despite the New Zealand army having quite a few Australians in it, and vice-versa. Historian Chris Pugsley talks about ‘a touch of envy on the New Zealanders’ part at the size of the Australian force.’ It was also believed that Australians ‘viewed us as “pale imitations” of themselves’.

Because of this trans-Tasman rivalry, the odd incident occurred. ‘If we meet or see them in a restaurant or anywhere near town there is generally a row of some kind,’ wrote one New Zealand soldier from Egypt. Lieutenant-Colonel William Malone, commander of the Wellington Infantry Battalion, wrote of being unimpressed by the behaviour of Australian soldiers, and other New Zealand officers saw them as drunken, stroppy and unruly.

Pte. Tony Fagan describes the scene at the Wazzir riots.

"I happened to be, incidentally, in the Battle of the Wazzir, I call it the Wazzir because I think that was the area where these various places were – a lot of brothels and so on. And I happened to be in that area, I got a day's leave to go into Cairo, and I became involved, I didn't want to be involved, in this riot. It was a real riot, you know, they set the place on fire, and the girls from the brothels were crawling along the ledges at the top of the building, and the fire engines arrived and the boys tipped the fire engines over, and cut the hoses.

"It was rather, a disgraceful thing really. And eventually there were some English troops firing down the street. I was in a doorway when that happened. But they broke into – there were liquor stores too, you see, and they were handing out bottles to the troops at the back, and people got a bit drunk, I suppose. And it was quite a disgraceful day, and I arrived back in camp – I suppose I did what everyone else was doing, and I arrived back in camp with a loot: a four-burner primer stove (I was drenched in kerosene), and a bar of soap. That was my loot from this riot." 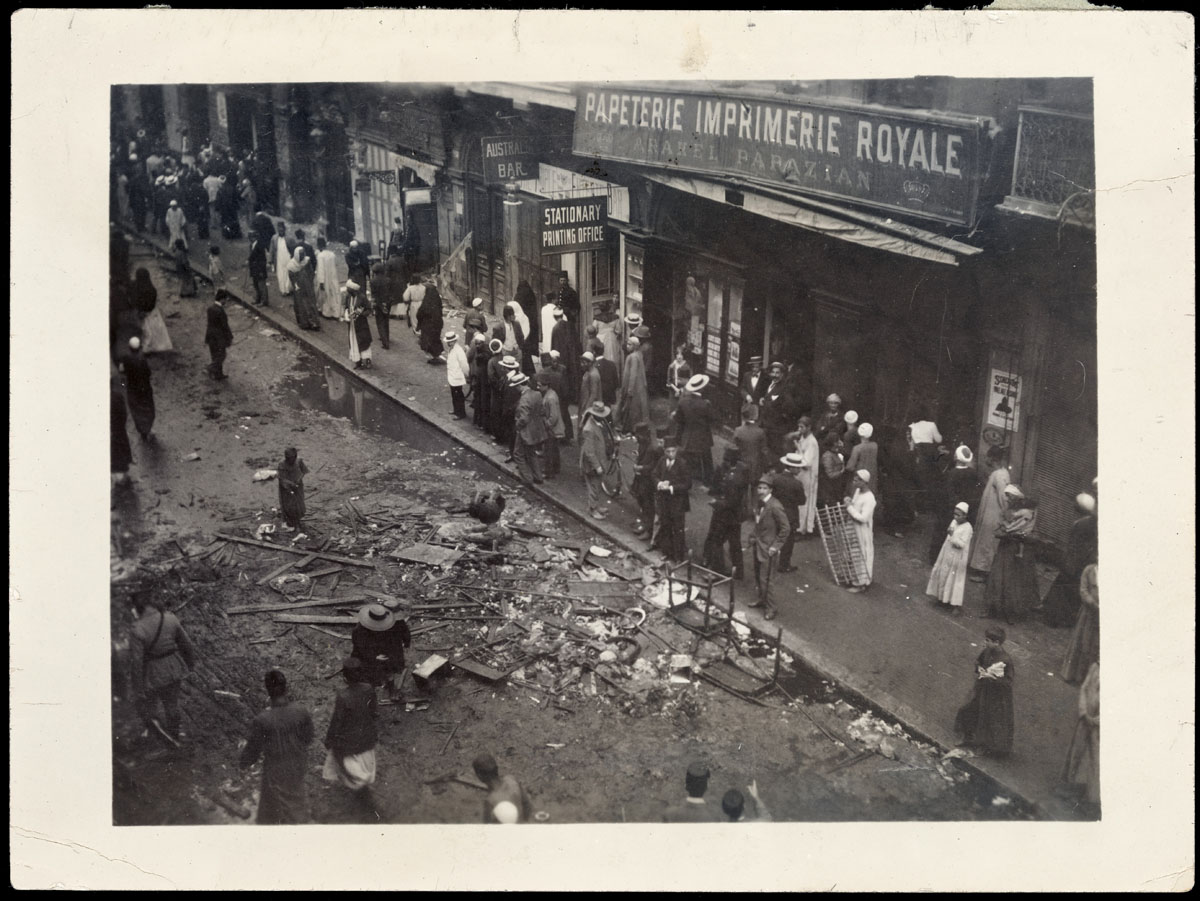 Haret el Wasser, a street in red-light district of Cairo after the riots in 1915.
Credits

The Gallipoli campaign would end the sometimes ugly antagonism between Australians and New Zealanders that had been present in Egypt. As historian Chris Pugsley wrote: ‘Rivalry would always exist but it would now be mellowed by mutual admiration.’

The author of Australia’s official war history, Charles Bean, who was a war correspondent at Gallipoli, wrote ‘As brothers they had died, their bodies lay mingled in the same narrow trenches, as brothers they were buried. It was noticeable that such small jealousies that had existed between Australians and New Zealanders in Cairo vanished completely from this hour. Three days of genuine trial had established a friendship which centuries will not destroy.’