The Russian Revolution
Two Russian soldiers, travelling via motor car through Petrograd, hold red flags affixed to their rifles during the revolution.
Credits

Late 1917 went from bad to worse for the Allies. The final blow came when Russia pulled out of the war.

Although the Russian Tsar, Nicholas II, had been deposed in February 1917, a provisional government had continued to fight alongside the Allies. But in early November, when the Bolsheviks (communists) seized power, they made it clear that they wanted no further part in the war. Russia signed an armistice with Germany and the other Central Powers on 15 December.

Historian Dr Ian McGibbon talks about the impact of the Russian revolution.

The impact of the Russian revolution

"Although Russia remained in the war following the overthrow of the Tsar in early 1917, the Bolshevik coup d’etat in November eventually led to the withdrawal of Russia from the war altogether. The Treaty of Brest-Litovsk in March 1918 brought this process to a conclusion. By the time the treaty was signed, 48 German divisions had headed west from the Eastern Front. General Ludendorff, the effective German commander, chose to use the temporary advantage arising from his bolstered forces on the Western Front to launch an offensive aimed at achieving a decisive victory. The Russian Revolution therefore made possible Operation Michael, the German spring offensive launched on 21 March 1918 with spectacular initial results but ultimately disastrous consequences for the German cause."

After the devastating defeat at Passchendaele, the New Zealand troops’ morale was low. They were suffering through an icy-cold winter in Polygon Wood when they heard about Russia, and their morale plunged further. They, like the other Allied troops, realised that the Germans would now be able to move soldiers from the Eastern Front where they had been fighting the Russians – to the Western Front. The Germans swiftly moved around 50 divisions. Their speed was partly because the Americans, who had declared war on Germany on 1917,  were already sending troops to the Western Front, albeit slowly. The Germans wanted to strike decisively before the Americans could make a greater impact.

In March 1918, the Germans launched their ambitious, but ultimately unsuccessful Spring Offensive.

That same month, Russia and the Central Powers signed the Treaty of Brest-Litovsk, in which Russia ceded land including the Baltic States, and agreed to substantial reparations. Russia might have been out of the First World War, but its own civil war was just beginning. 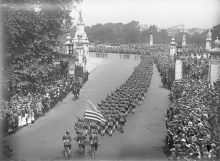